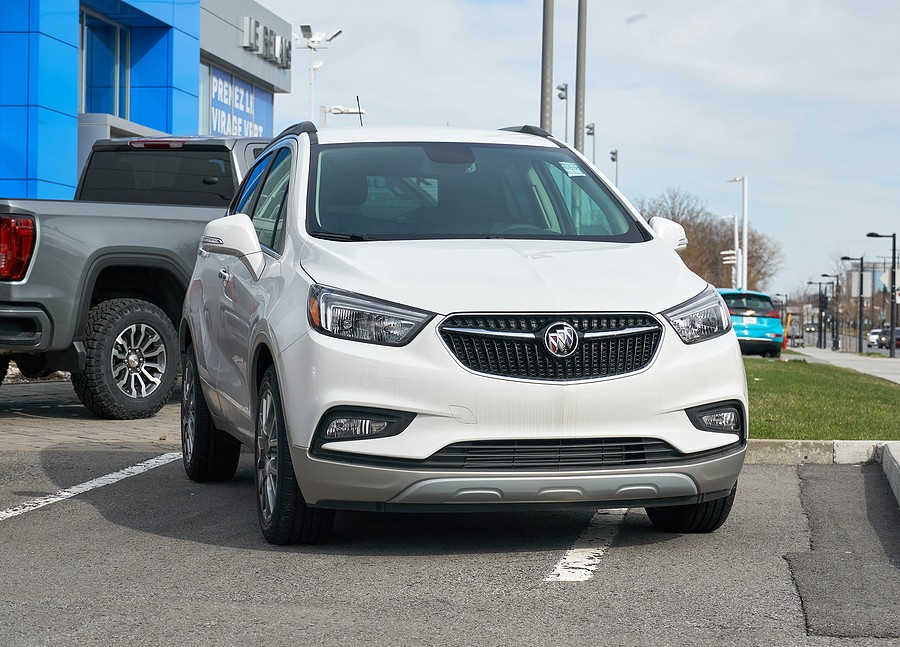 2017 Buick Encore problems Have to do with the engine, brake system, exterior, interior, and electrical system.

The 2017 Buick Encore is one of the top-rated affordable sub-compact SUVs. Although this SUV attracts tons of buyers every year, immediately after they drive this vehicle, buyers discover the significant mechanical issues at different stages of the vehicle’s lifetime.

According to several online platforms, the 2017 Buick Encore received tons of reported complaints regarding the engine, the brake system, the exterior, etc.

With engine problems ranked at the top, several new shoppers are hesitant to purchase the 2017 Buick Encore. Some of the current owners might be looking to sell this vehicle instead of dealing with the complicated engine problems.

Although the 2017 Buick Encore was not the worst model year for this automaker, several larger websites warn customers from owning this vehicle if they don't want to deal with mechanical issues.

Before judging whether it's worth purchasing a used 2017 Buick Encore or selling your current one, you need to familiarize yourself with all these problems and understand all potential repair costs and options.

This article provides you with detailed guidance regarding the 2017 Buick Encore problems. We conducted an in-depth review of all posted complaints about the vehicle’s mechanical issues. We also mentioned all 2017 Buick Encore recalls.

Before we dive into the details about the 2017 Buick Encore, it is very important to understand the overall description and familiarize ourselves with the best and top features of this car.

The 2017 Buick Encore was ranked as number one in the best 2017 affordable subcompact SUVs category by receiving a score of 8.1 out of 10 according to cars.usnews.com. The vehicle received this high rating for the great cabin space, the best fuel economy, and the user-friendly infotainment system.

Buick Encore has two drivetrain options, including four-wheel drive and all-wheel drive. This model year comes with a 1.4-liter 4-cylinder engine and a 6-speed automatic transmission.

General Motors produced the Buick Encore since 2012. This vehicle received very high popularity quickly. In 2017, the Buick Encore came with a greats design attracting several customers. However, after driving this vehicle for a couple of years, customers reported significantly higher complaints than the previous model year in 2016.

The worst thing any driver would want to deal with is complete engine failure! Unfortunately, the top and most reported problem about the 2017 Buick Encore has to do with engine failures.

Similar customers indicated that the check engine light illuminates suddenly without any previous warnings. Also, some customers had to do with fire in the engine!

Surprisingly, these engine problems occurred relatively at the newer vehicles around 10,000 miles.

Unfortunately, General Motors did not indicate that there is an error in the engine.  The only thing GM did is to request dealerships to inspect any signs of oil leaks or burning smells. With that, dealerships are requested to inspect and check the camshafts, the camshaft cover, and the seals.

Most of these reported complaints were not resolved unless the engine was rebuilt. In some scenarios, customers had to replace the turbocharger or the piston and rings.

If your 2017 Buick Encore engine does not fail, you might face significant issues with the braking system.

Several customers indicated that the 2017 Buick Encore braking system is not very effective, and there is a high chance to deal with the vehicle rolling over, especially in what weather.

Some customers also mentioned that the 2017 Buick Encore brake might make some weird squealing noise every time you press them.

While General Motors did not recall any 2017 Buick Encore due to braking system problems, they released a bulletin discussing weird loud noises coming from the braking system. They advised dealerships to refresh the rotors and replace the rear disc brake pad.

Again, braking system problems occur at very new vehicles; some of them were at only 50 miles!

When you invest thousands of dollars purchasing a vehicle like the 2017 Buick Encore, you want to make sure that every safety feature is working properly. Otherwise, it is considered a waste of money.

Seat belts are essential in any vehicle and if the car does not have working seat belts, it might be a high risk of injuries, especially when involved in crashes.

A good number of complaints reported significant issues with the seatbelts not engaging. Those customers were Very nervous about riding the 2017 Buick Encore knowing that not all safety features worked properly.

Luckily, green Motors immediately released a recall to take care of the safety problem that has to do with the seatbelts and some other issues related to the airbag sensor diagnosis.

Are there any recalls on the 2017 Buick Encore?

Yes, the 2017 Buick Encore received two recalls. One of them was focused on airbags; the other has to do with the airbag software.

On October 13th, 2016, General Motors decided to recall about 3,640,000 vehicles due to the airbag system issue. General Motors discovered that the frontal airbag does not occur during the diagnosis crash tests. All affected vehicles were invited to visit the nearest General Motors dealership to resolve the favor charge.

Unfortunately, On August 4th, 2017, General Motors recalled the same vehicles recalled previously in 2016 due to another problem with the airbag sensing system. They indicated that all repaired vehicles needed an update to the sensing and diagnostic module. If this module was not updated, the seatbelts' tension is, and the airbags will not deploy after an accident.

About 40,683 vehicles were recalled again to update this module.

In general, the 2017 Buick Encore received a reliability rating of 3.5 out of five according to the JD power reliability ranking. Although the vehicle received two safety-related recalls by the NHTSA, it is still considered a good car for those shopping for a used vehicle.

However, before purchasing your next 2017 Buick Encore, you need to be very careful and perform the necessary Inspection steps to avoid dealing with a faulty or damaged 2017 Buick Encore internal.

To make the article more useful, we decided to highlight some of the two reported complaints from several customers who had significant issues with their 2017 Buick Encore.

Once listening to those stories might help you relate and see whether it's useful to purchase a 2017 Buick Encore or not.

If you are the current owner of a similar vehicle, you can determine if it's worth fixing your vehicle or not by Listening to what these customers have to say about their experience:

The first customer got involved in a stressful situation where his vehicle burst into flames due to a significant engine issue. He mentioned: “My 2017 Encore burst into flames. I arrived to work after lunch. I parked and turned off the ignition, and I see smoke coming from under the hood of my car. I paused just a moment to see if it would stop but it got worse very fast. I grabbed my purse and jumped out of the car as the front end closest to the windshield was becoming engulfed in flames. I immediately called 911, but by the time the fire department arrived, it was too late to save the car.”

The second customer reported a problem to NHTSA regarding the automatic transmission and the braking system. He indicated: “I have an automatic transmission. When I am stopped at a traffic light on an incline, the car will sometimes roll backward with my foot on the brake or change my foot to the gas pedal to move forward once the light changes. The more the incline, the worse the problem.”

The last customer had to deal with significant issues in the seatbelts, and he reported a complaint to the NHTSA website saying: “I had just leased this car, drove less than 2 miles from home when my brakes failed. I applied brakes to stop, but the car would not stop, it slowed to 14 mph – kept moving until I slammed into truck approx. 3-400’ ahead of me, had plenty of room to stop.”

How to avoid buying a 2017 Buick Encore with mechanical problems?

If you're planning to invest a lot of money purchasing your beloved 2017 Buick Encore, you need to step back and make sure that you're doing all your due diligence before making the final decision.

The 2017 Buick Encore was reported to have many problems, especially those related to the engine. Therefore, even if you fell into a decent 2017 Buick Encore, some of these vehicles might have hidden mechanical problems.

Therefore, you need to use their best professional judgment and probably bring your professional mechanic to inspect the vehicle before purchase.

While most engine issues occurred at the early stages of the 2017 Buick Encore, it doesn't hurt your professional mechanic to test drive the vehicle and ensure no transmission issue.

When the mechanic rides the car, he will keep an eye and ear for any weird sounds indicating significant mechanical issues in the 2017 Buick Encore.

Even if your mechanic does not know all reported complaints about their vehicle, it is a great idea to share some information you learned from this article highlighting the top reported complaint. Hence, he keeps it in mind when just driving your future 2017 Buick Encore.

Is it worth fixing my 2017 Buick Encore engine problems?

Unfortunately, engine problems require very high repair costs. Therefore, before attempting to spend a penny in fixing your 2017 Buick Encore, you need to evaluate the overall situation because it differs significantly from customer to customer.

If you realize that when fixing your 2017 Buick Encore, repair costs are not going to add any value or significant value to your car, it might not be worth fixing it

If you notice that repair costs for your 2017 Buick Encore are piling up and approaching 75% or more from your vehicle's value, it is not worth fixing this car.

Thus, your best approach is to sit down and list all major repairs in your 2017 Buick Encore. You might need to include any potential new tires, or another regular maintenance is as part of your list.

Once you have the final number, compared to your current vehicle's value, see after fixing this car how big the difference will be.

In most scenarios, fixing 2017 Buick Encore engine problems end up with selling the car instead. Therefore, consider researching someone willing to purchase your 2017 Buick Encore with major mechanical problems.

Luckily, Cash Cars Buyer is one of the fewest companies that guarantee to accept your 2017 Buick Encore despite the mechanical complications.

The 2017 Buick Encore is a great affordable sub-compact SUV V that many people dream of owning. If you're planning for your next 2017 Buick Encore, you need to be aware of all reported mechanical complaints about this vehicle from real owners who drove it after a couple of years.

Many issues with the engine plagued the vehicle. In some scenarios, the vehicle's engine might start flames which could be very dangerous not only for you but also for the surrounding people.

If you have a 2017 Buick Encore and you're dealing with significant engine problems or other problems, it might be the right time now to sell it and purchase a better one.

If you're looking for someone willing to purchase the 2017 Buick Encore despite its major mechanical problems, you are at the right place!

Cash Cars Buyer guarantees to buy your 2017 Buick Encore and provide you the top dollars your vehicle can meet around your area. We also provide free towing for all customers despite their living location around the United States.

Our process is very simple, and we invite you to reach out to our customer service at 866-924-4608 or visit our home page click on the free instant online offer.