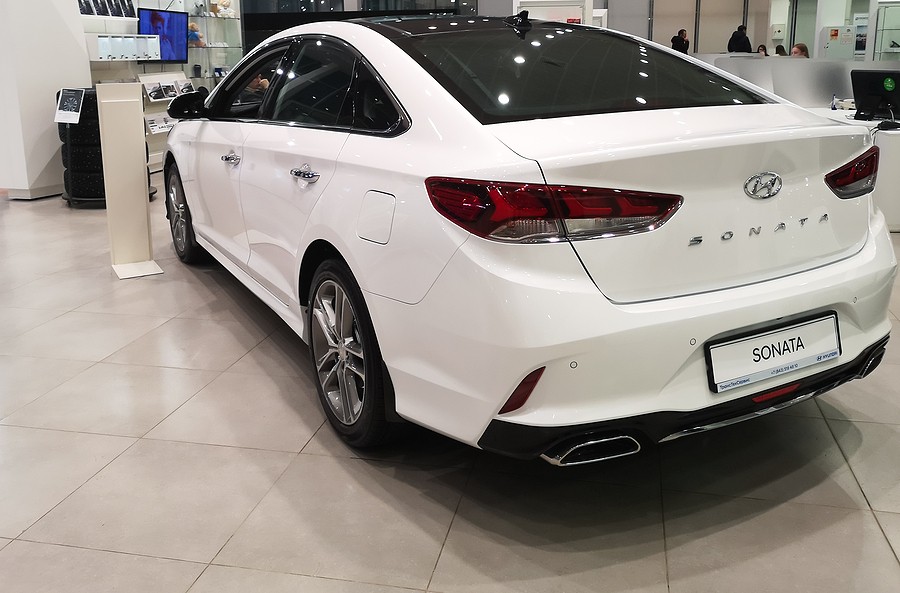 2013 Hyundai Sonata problems are mostly related to the engine, unfortunately. Reported engine problems required very high repair costs, up to $6,800! Does this mean that you should stay away from this vehicle?

The best way to answer this question is to look into what people say about their 2013 Hyundai Sonata vehicles. Fortunately, there are many online resources where you can get direct reviews about vehicles' mechanical problems.

In this article, we provide a summary of an intensive review of most reported complaints about the 2013 Hyundai Sonata. In summary, we highlight the main problem, the suggested repair options and repair costs, and the mileage at which the problem occurred. We also provide some quotes from current vehicle owners to provide a more detailed overview of what they think of their vehicles.

The 2013 Hyundai Sonata was featured as the top 2013 Affordable Midsize Car, as reported by cars.usnews.com. It was also ranked as the sixth-best Used Midsize Car under $15K. The vehicle was featured for the great fuel economy and the very nice interior design.

The 2013 Hyundai Sonata comes with either a 2.0 L or 2.4 L four-cylinder engine. The engine is associated with a six-speed automatic transmission and has a fuel tank capacity of 18.5 gallons.

According to Kelly Blue Book, the Manufacturer Suggested Retail Price for the 2013 Hyundai Sonata is about $21,500.

Engine problems are very critical for any vehicle. This is because they usually require very high repair costs, and you can never do it by yourself unless you are an experienced mechanic. Almost 100 people reported engine issues wit the 2013 Hyundai Sonata, including engine seizing, dying while driving, running rough, consuming a lot of oil.

More than fifty owners reported that their 2013 Hyundai Sonata started smoking and cut off suddenly without any warning signs. To get the problem resolved, all owners had to install a new engine for about $6,800. This repair cost is one of the highest that anyone could face with this vehicle. Engine siege occurred mostly at vehicles around 80,000 miles. In a couple of incidences, engine siege occurred at vehicles around 3,000 miles.

Another group of owners reported that their engine would die suddenly, again, without any warning signs. They would drive their car and suddenly have the dash lights go off, and all power is gone. The problem was resolved by replacing the engine. The Average reported repair cost for this issue was about $3,000, and the problem occurred mostly at vehicles around 83,000 miles.

The rough engine is also very common with the 2013 Hyundai Sonata, with more than ten owners reported such a problem at vehicles around 66,000 miles. The problem also required installing a new engine to get resolved. The average repair costs for the rough engine was about $5,000.

A couple of owners reported that their engine consumes way too much oil than usual. The problem occurred at vehicles around 66,000 miles, and the owners did not include information about repair options or repair costs.

Steering problems were the second most reported about the 2013 Hyundai Sonata. Most of these problems were related to steering worn out, steering pulled to the side, steering making a weird noise, and sensitive steering.

Several owners reported that their steering would move to one side without a clear reason why and the dealership was not able to assist them and find a solution. Steering leaning to one side was reported by vehicles around 27,000 miles.

A couple of 54,000 miles vehicle owners reported hearing weird thumping noise whenever they attempt to turn. To get the problem resolved, they had to either repair the steering or replace the failed steering column.

Finally, about five owners reported sensitive steering in their 19,000 miles 2013 Hyundai Sonata. They mentioned that it is hard to control the vehicle as any attempt for a slight movement would make them be “all over the road.” This problem was described as “pretty bad” and could cause safety issues.

Seven complaints were reported about the 2013 Hyundai Sonata's cruise control. The owners mentioned that they had to bang on the steering wheel to get it to work, but not all the time. The problem was resolved by either replacing the cruise control or the wiring harness. Cruise control issues occurred mostly at vehicles around 38,000 miles.

Several owners reported issues with their vehicle's Bluetooth connection, where it takes a very long time for the phone to connect with the vehicle if it did. They mentioned that this problem could cause safety issues as they can't use the hands-free phone capabilities. Bluetooth issues occurred mostly at vehicles around 23,000 miles.

A couple of 2-year old 2013 Hyundai Sonata reported complete failure with the navigation system. They reported that they were traveling out of state and were not able to use the vehicle's navigation system right after they left the state.

Lastly, at least one owner-reported issues with uneven seating with the 2013 Hyundai Sonata. The passenger seat is much lower than the driver seat, and you can't see the dash when sitting on it. The owner had to change the seat rails with a higher one to get both seats to be even.

Lights problems were also very common with the 2013 Hyundai Sonata, as reported by more than 20 owners. Most light issues were either issue with the brakes lights and headlights.

The majority of reported complaints indicated brake lights blowing frequently. Brake lights would blow more than one time in a row and within the same month. The owners indicated that this frequency is getting into an “alarming rate.” To get the problem resolved, they had to replace the wiring harness for about $350, and the problem occurred mostly at vehicles around 98,000 miles.

Electrical system problems were reported about 20 times about the 2013 Hyundai Sonata.

A couple of owners reported that the vehicle doesn't detect the keys even after they changed the batteries. To get the problem resolved, they had to replace the hydraulic power unit, the battery, or the starter. The average repair cost for such a problem was about $610, and the problem was mostly reported by vehicles around 63,000 miles.

Two owners reported seeing flames coming out of their vehicles while driving on the highways. The problem was very concerning and can cause safety issues to 72,000 miles of vehicle owners. The complaints did not include information about repair options or repair costs.

AC and heating problems were also not reported as frequently about the 2013 Hyundai Sonata. Only three owners reported that their AC system blows warm air and doesn't seem to work most of the time properly—the problem required replacing the AC compressor at vehicles around 100,000 miles.

Three owners had issues with the key fob for years, and they mentioned that the key doesn't open the doors or start the car. The problem was resolved by replacing the fobs for about $300, and it was mostly reported by vehicles around 33,000 miles.

A couple of owners reported issues with paint peeling on their 2013 Hyundai Sonata exterior. The problem occurred by some peeling in the paint topcoat followed by complete paint bubbling. To get the issue resolved, the owners had to repaint the parts for about $470 on their 52,000 miles vehicles.

2013 Hyundai Sonata brakes problems were not very common, as reported by only four owners. The biggest issue was with complete brakes failure in vehicles around 18,000 miles.

In this section, we included information about what current owners think of their 2013 Hyundai Sonata Problems.

The first owner reported a complaint about his vehicle's engine to carcomplaint.com: “My son is preparing to leave for Denver for his new job. 3 days after he accepted a job offer in Denver, his Sonata seized [evening of February 22nd on a date no less]! I appreciate the assistance Hyundai MC and Suntrup Hyundai in St. Louis has extended in processing the recall for engine replacement but my Son leaves next Friday, 3/7/2020. He won't even get to celebrate his 25 birthday with his mother and me as he'll be setting up his living arrangements in Denver. So while an engine replacement and towing reimbursement is the “normal” remedy of the recall, it just doesn't get near to addressing the real situation my son is in. A solution requires time and resources he just could not put together in the timeframe he needs to establish himself in Denver for his job, the start of his career! He'll be in Denver while the car is in St. Louis. …More to come on this particular situation.”

The second owner reported a complaint about the vehicle's bearing issues to Edmunds.com: “Updated my review…  I have own multiple vehicles over the years.  I average 100 miles a day just going to my office.  I also drive that vehicle for my job.  I average about 35,000 miles a year.  I have never gotten rid of any before 250,000 miles and never had any major issues with any of my previous vehicles.  At 103,000 miles in this 2013 Sonata, the main bearing burnt up.  Originally I was told my a mechanic that it was the oil pump.  (Took it a different place to have the engine replaced.) The engine has been burning oil since 40,000, at 60,000 the engine starting chattering.  The transmission has been slipping since 80,000 miles.  I've heard that Hyundai's engineering/manufacturing has come a long way, but they still have a long way to go.  As soon as I replace the oil pump, it's getting traded in for anything but a Hyundai or Kia.”

The third owner reported a problem to vehiclehistory.com about his car's paint: “The paint is peeling from the car. The light bulbs always seem to go out. Car drives rough. Car is cheap always needs something. The interior is light color so it shows dirt. Car is somewhat reliable electronics are fine comfortable inside. I like the heated seats.”

The 2013 Hyundai Sonata was ranked as one of the top affordable midsize vehicles, according to cars.usnews.com.

While the vehicle was featured in many online top lists, current and previous owners reported frustration about frequent major mechanical problems. The biggest problem reported was related to the vehicle's engine. Unfortunately, engine problems usually require high repair costs, and some owners of the 2013 Hyundai had to pay $6,800 on repairing the vehicle's engine.

Besides engine problems, the 2013 Hyundai had additional problems related to the steering system, the interior, the lights, the electrical system, the transmission, and others.

As we mentioned before, our goal of this article is to assist new shoppers in making an informed decision about whether to buy the 2013 Hyundai Sonata or not. Now with the engine problems in mind, current shoppers need to sit down and think carefully about the best decision to make. Can they deal with engine problems at the specified mileage?

We also provided a direction to current owners of the 2013 Hyundai Sonata. They now have a better image of what type of problems they will be facing. This way, if they get into major engine problems, and if the repair costs get close to the value of the vehicle, they might need to think about selling it.

If you decided to sell your 2013 Hyundai Sonata due to mechanical problems, we could assist you. At Cash Car Buyer, we are one of the top-rated junk car removal companies in the area. We buy any unwanted car despite its condition. Give us a call today and get your free quote!